Less More
6 years 2 months ago - 6 years 2 months ago #2412 by OldMule
2298CPM in Cañon City, Colorado was created by OldMule
Hope I'm doing this right and in the right place and such... Wanted to get the info out asap.
Had to go to "the big city" (Ha!) today. Took my Geiger with me, and have an all time high record.
Reading taken at 9:23:39 this morning, Saturday, the 16th of July, 2016 while holding the factory default GQ GMC-300EPlus geiger counter out the passenger-side window heading North.
Interesting it was right there where the train crossing is...

Travel speed was somewhere between 30 and 35MPH, didn't slow down. Wind was as close to nil as it gets. Not a fluttering leaf to be seen at the time. 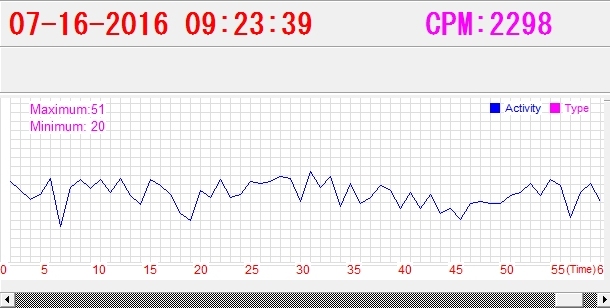 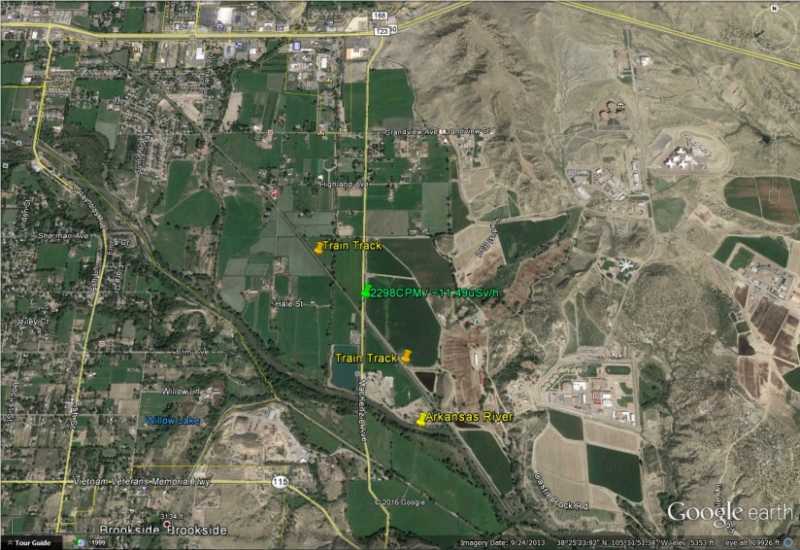 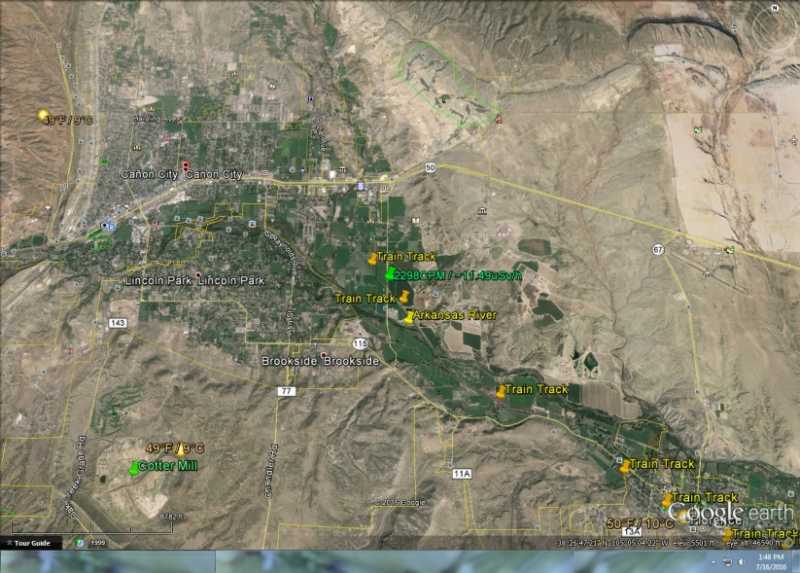 (sorry the location screenies are blurry. Had to squish them or they woulda' been over a meg)
-edited to add travel and wind (or lack thereof) info-

Less More
6 years 2 months ago #2413 by Bert490
Replied by Bert490 on topic 2298CPM in Cañon City, Colorado
This is the right place to show this. It's good to include the screenshots; I hope another user of GC Data Viewer can chime in. I don't use it, but the graphs don't seem to be in the same units as the single value at the top. The graphs show values between 20 and 50 over a 60 minute (second?) time range, but units are not shown. Also, since your really high CPM value was near the train tracks and you didn't slow down, there should have been a rise then a fall in the graph, no? When you were getting the high reading, did the detection clicks speed up to become a hiss? Or did the LED flashes seem to be non-stop / on all the time? 2300 CPM is about 38 CPS (Counts per Second). If I saw this come and go while passing some area, I would drive back and see if it corresponded to something physical, like debris fallen off of a train (then call the authorities).

Your Radmon graphs from home seem pretty normal, not going over 35 CPM.

You had a question earlier about the Safecast devices; their data from both Vail and Canon City appear to be from the bGeige Nano detector, which uses the LND 7317 tube from what I could find. This pancake style tube can measure Alpha.
The following user(s) said Thank You: OldMule

The maximum and minimum it shows are per second, as I understand it.

I couldn't really hear the thing very well, so dunno about the hiss, but I do know that there was definitely a build up and drop off, as I was watching it. The screenie was of the highest point.

I couldn't pull over or stop. I had a deadline. Not only that, but that's by one of the prisons -they have their own corn field- (There are several prisons around here. Yikes!), and it's probably a very bad idea to stop there if at all avoidable.
I'll include the actual log file so you can see that if you'd like. It shows the build up and drop off -though there's a lot in the pretty high range. Much of the road is along or near the track. Maybe that's a clue in and of itself. Again, the .txt will have to be changed to .bin and the "data viewer" that comes with the unit will have to be used to see it.
I left the house a few minutes after 9am (7-16-2016), and you can see it start to increase when I went out the door, about 9:12am. It's pretty near the end of the log, because the log spans a couple of days. No way to shrink it that I know of.

Now I am starting to think it could be something coming off the train. There's a quarry at the West end of the line (on maps it shows like it goes further than what it is, but there are miles of abandoned track nowadays), that from what I've read has the 3rd largest deposit of uranium in the country (if not more), and a company has been looking into developing it. I don't know if they've started, or if they might be taking out samples, or if some of the rock from around there might be getting used for other purposes (sure hope not!), but it's a possibility.

I ran across a newspaper article about the quarry area while I was looking for possible sources of the rads. It's dated, 2013, so very possible things have started to happen since then. The article is Here .

Looking at it again, you can kind of tell when I was nearer/ further to/from the tracks by the number (CPMs)... you can also tell when I brought my arm back in for a few minutes to rest it or went indoors, etc. That's when it goes back into the 20-40's range like it was in the house... gotta' be, beta radiation or it wouldn't do that, right?
No pun intended, but the tracks hadn't even crossed my mind until I looked up the spot where I'd seen that really high reading once I got home and saw it on the map and went "Oh reeeeally-y-y-y" (Jim Carrey style!

). I'll pay much closer attention to where I am vs the tracks vs the rad levels when I'm out in the future. Still far from certain on pinning down the source.

Yes, rads look normal while inside my house. It's beta radiation from what I can tell (likely some alpha with it, too, but can't check), so very little if any is getting through the walls. Old houses were build solid! Might even have some old lead paint under the newer paint on/in the place

That's all I can think of for now. Thanks again!

P.S - Thanks for the info on the Safecast thing!

Last edit: 6 years 2 months ago by OldMule. Reason: To add the P.S.