This is one of my latest Geiger counters and it is in fantastic condition. To say this is probably more than 60 years old, it has really faired well. It wasn't working when I got it as one of the battery terminals had some corrosion to it. After a quick but very awkward clean up of the terminal it came to life. What really attracted me to this, besides it's condition, is the fact the meter is in CPS (counts per second.) I thought it unusual for a small counter of this era to be in CPS. Being CPS would mean it would be sensitive, which it is, fairly so. The unit is complete as far as I can tell. There is next to nothing on the internet for this counter, also others from the same time. Just a scattering of images from auction sites is mainly it. As there is no info I have decided to make some info available for this counter, and looking forward I think I may do this with my entire collection. It would be nice to catalogue them all with good images and as much documentation as possible. I scanned the manual and tube datasheet and have attached them below. If anyone is interested in the hi-res images then let me know and I will upload them somewhere. I have only put low rez images here as I don't want to consume too much space.
Anyway, here is the Panax TM64 B.

I really like this counter. Not only is it in mint condition, (just needs a good dust and polish) it works really well. It has a very nice range from 0-10 cps to 1000 cps making it quite usable even by today's standards. The tube is a glass walled γ-sensitive Mullard ZP1210 (MX120/01). Interestingly the tube datasheet that came with the counter is dated 1980. This counter is most definitely from the 60's so I can't understand why a 1980 datasheet. There are only two conclusions I can surmise; 1, the tube has been replaced for one reason or another, or 2, someone has simply added the datasheet with the counter at some point in the past, maybe another collector. When I took it apart for the first time it was like it had never been opened. The screws all had a proper crack to them and the gasket was stuck nicely as I had to tap it around the seam to break it apart. But on the other hand the red tape covering the end of the tube doesn't look too old although there are no marks from previous bits of tape. It just seems unusual for the datasheet to be 20 years younger. The circuit is in literally two halves, one for the HV power supply and the other for the counter. It came with a small haversack that is only large enough for the counter and it's manual and it all fits quite well. This isn't light weighing in at 1718 grams (1.7kg) with batteries but no accessories, but it is compact at 185mm long, 63mm wide and 130mm deep. It feels solid and strong with thick walls and chunky construction. The meter is nice and super smooth on both fast and slow settings. It has a nice scale and even has the model number printed on the meter face. It doesn't have any feature for lighting up the display in the dark, not is there any 'glow in the dark' parts, which would make this difficult to use in the dark. The turn switches and solid with a proper detent for each setting and both have absolutely no wobble whatsoever. Everything about this feels quality. Whilst small, it is packed in, chunky and weighty. I think if this had a fight with a CDV-700, the CDV-700 would loose. It is probably more sensitive than the CDV-700 due to it's larger GM tube. The headphone socket works and clicks with all radioactive goodness. The battery compartment is quite unusual in this counter and I have never seen this principle ever. To insert the batteries simply unscrew the large cover, drop the first battery in and slide it over away from the opening, then insert the second battery. The lower battery terminals is one piece of metal that acts as a seesaw so when the battery cover is screwed back on it presses one battery down and the lower terminal acts as a lever to push the other battery up to contact the terminal. Quite ingenious as it allows a small opening for having the batteries side-by-side. And the seesaw terminal still has plenty of stiff springiness left!
In all I think this is a great little counter. It is compact, sensitive, really well built and looks to be very well thought out in design. I really like it. 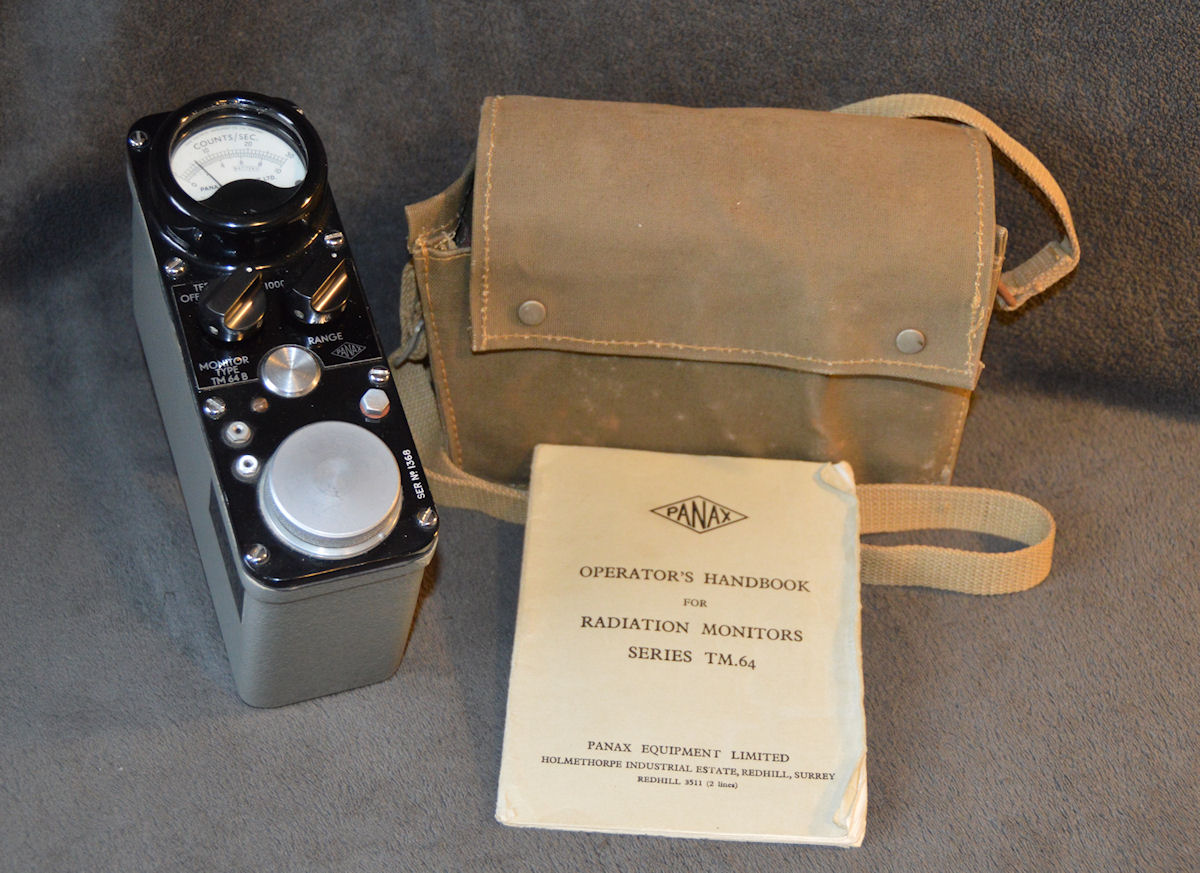 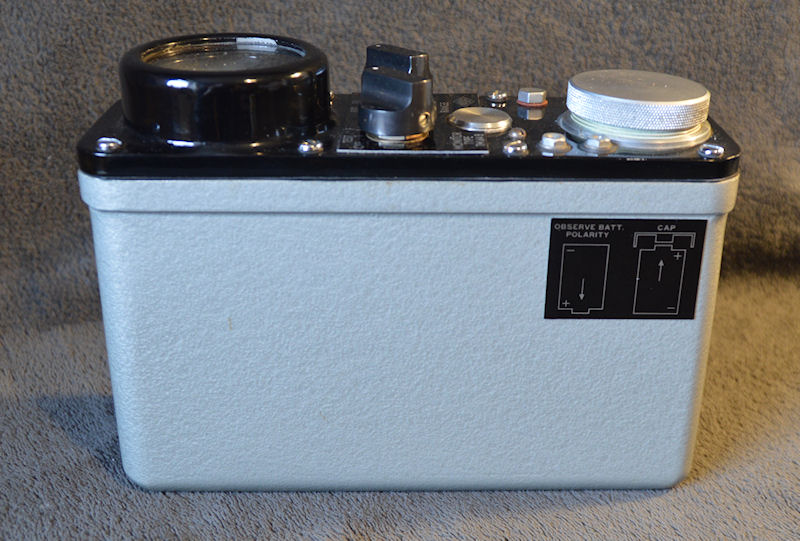 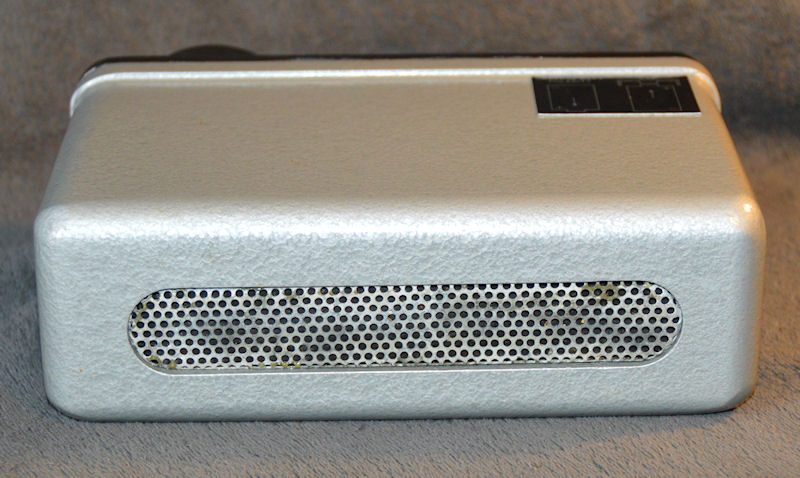 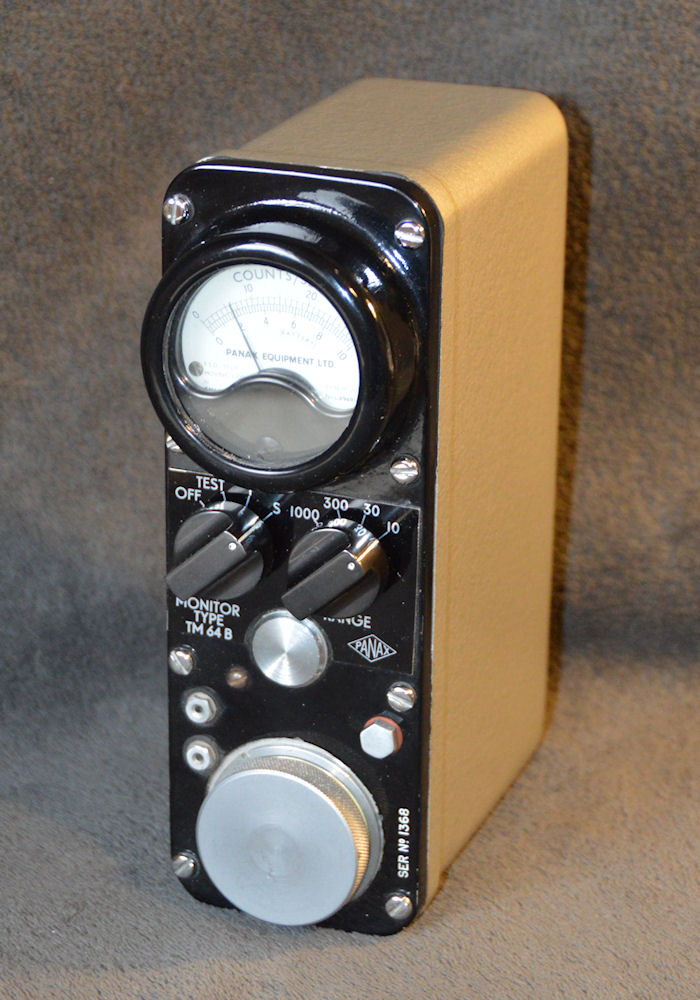 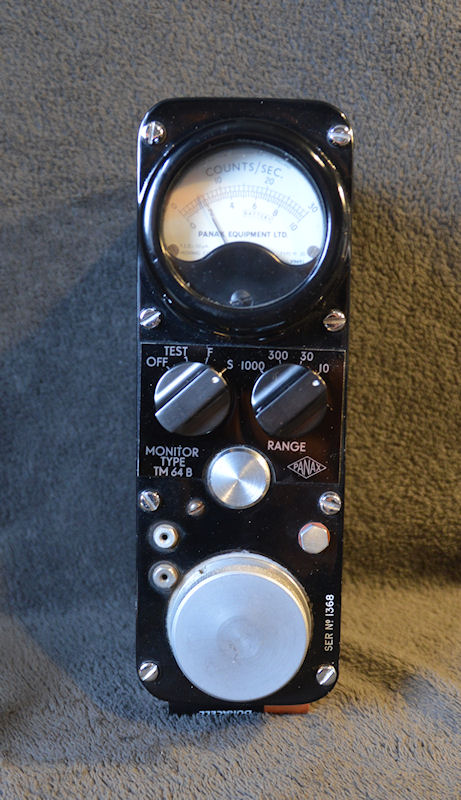 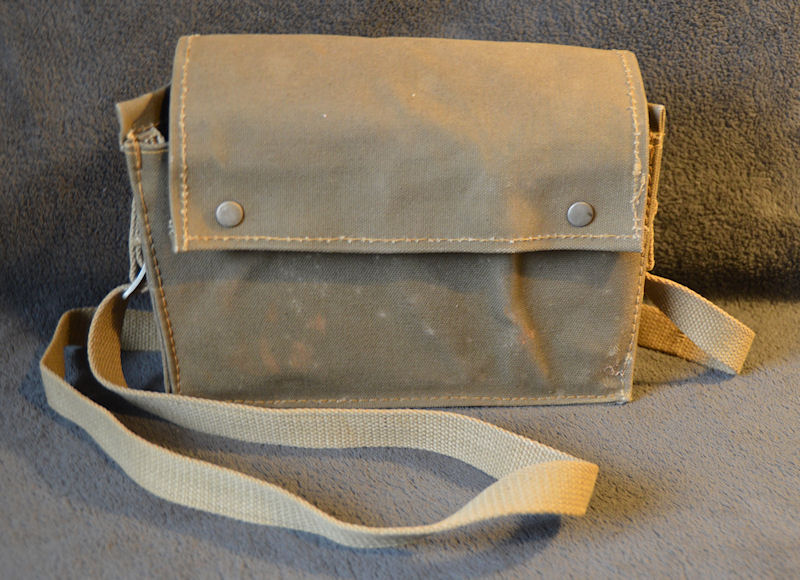 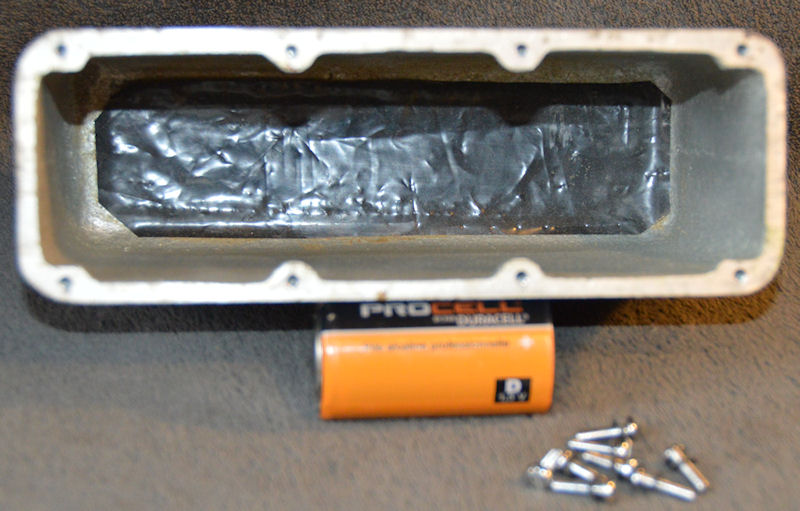 This is showing what appears to be some kind of plastic or vinyl that is covering the grille. I assume for water protection. 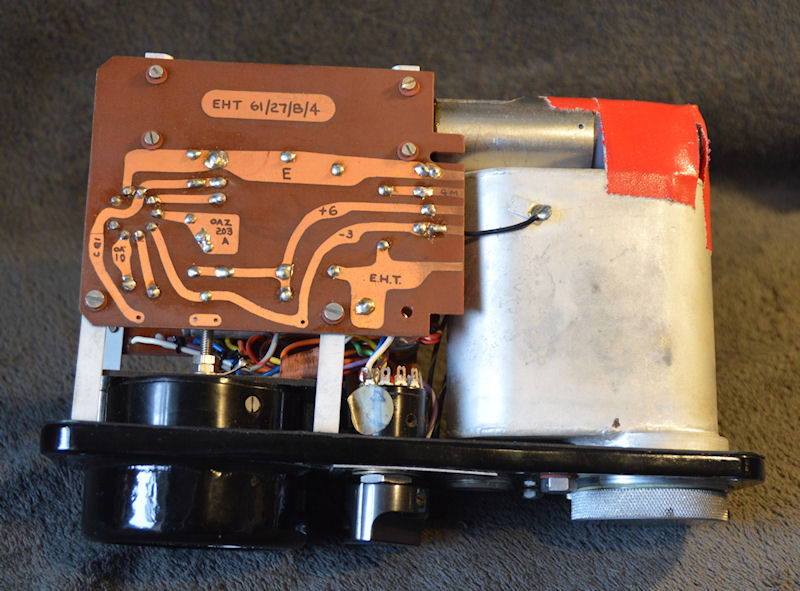 The HV power supply board. The top end (where the meter is.) 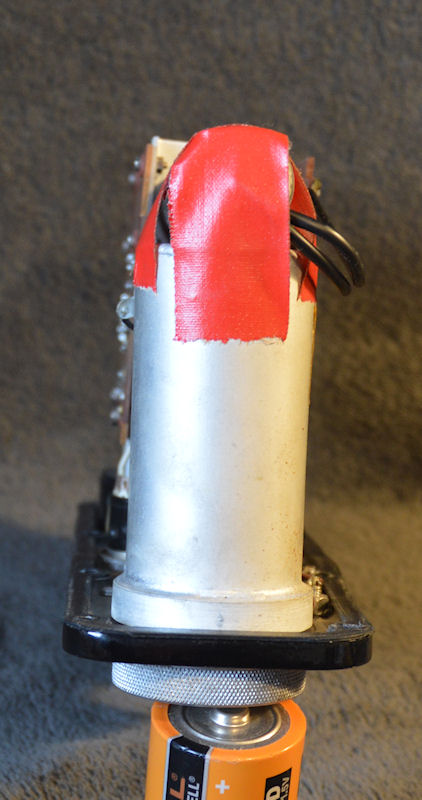 The bottom end (where the battery compartment is.) 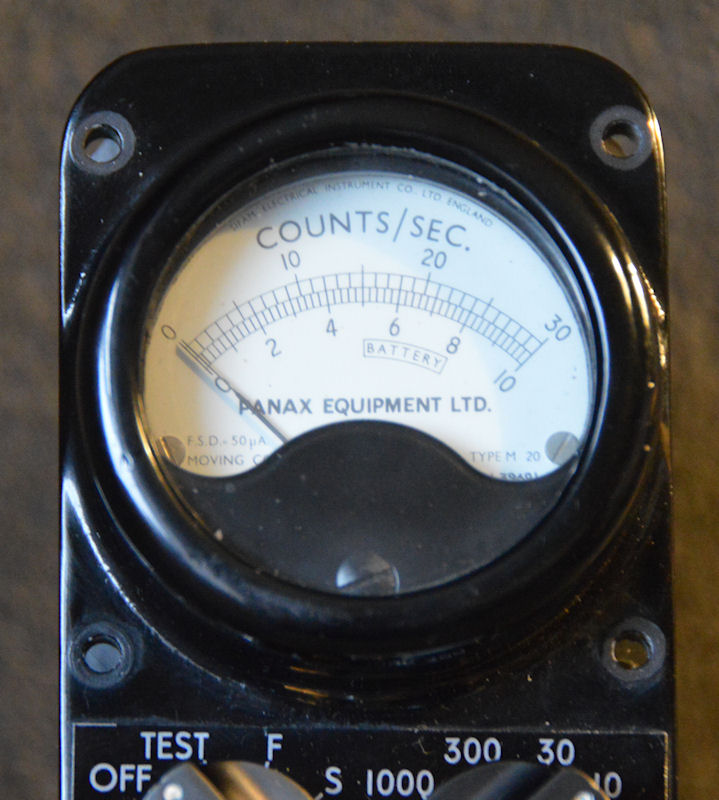 And here the meter with nice face. 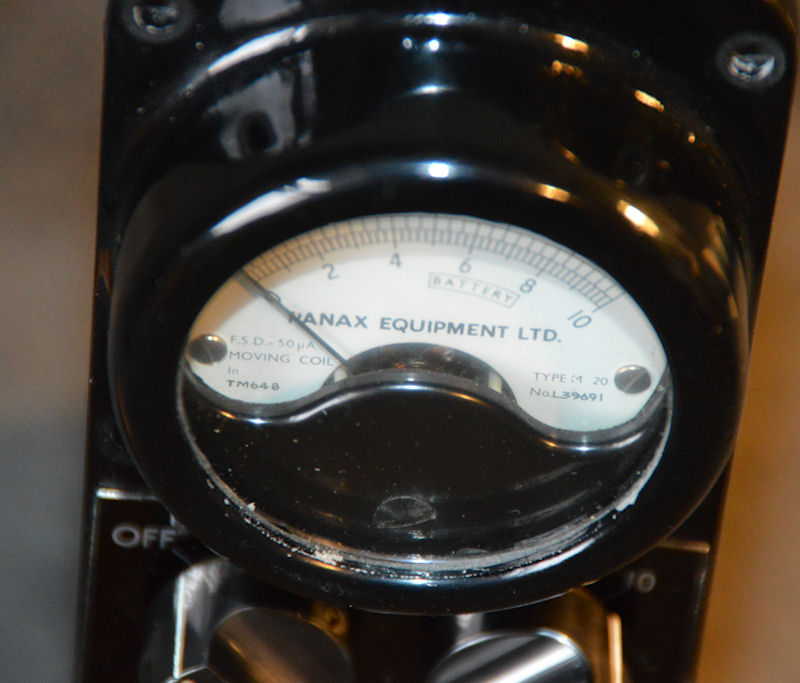 Another picture of the meter. Here you can see the model number of the counter printed onto the bottom left of the meter face.

And finally, below you can download the manual and tube datasheet for your interest.

Last edit: 11 months 3 weeks ago by Simomax. Reason: because I always forget something.

Less More
11 months 3 weeks ago - 11 months 3 weeks ago #6024 by Simomax
Replied by Simomax on topic Panax TM64 B Geiger Counter (Circa 1960)
Here are some pictures of the battery compartment. You can see the terminals at the bottom pivot in the middle like a seesaw, also with one battery inserted and then with two. I couldn't resist and took out the tube to have a look at it. It is rather large, pictured below next to a STS-5 tube (SBM-20 equivalent.) Seesaw battery terminals with pivot at the center. 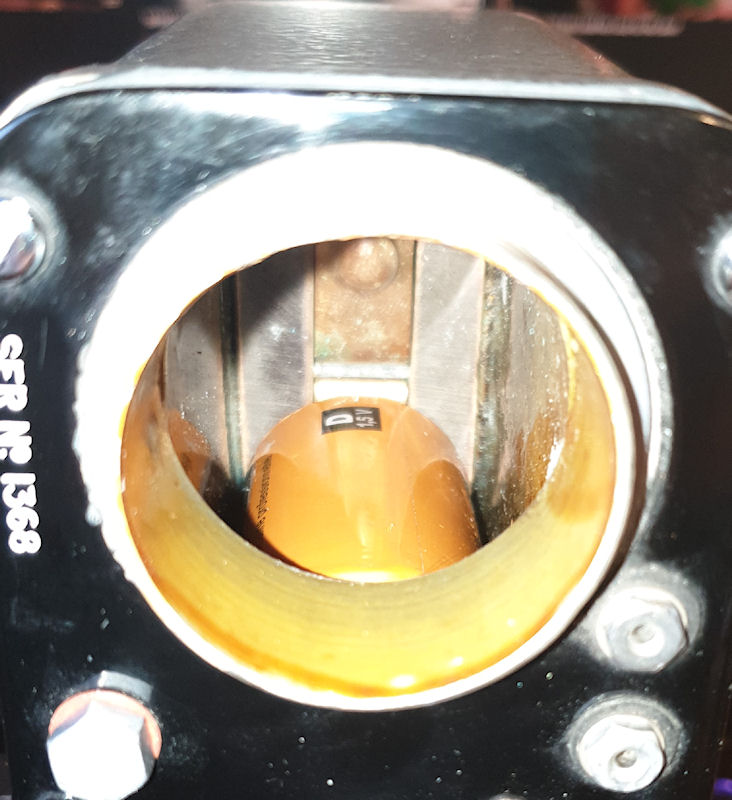 Two batteries inserted. The cap has a large shaft that pushes down on the positive terminal, the battery is pressed down making the seesaw terminal push the other battery up. Clever.

I couldn't resist taking the tube out to have a look. Pictured next to a STS-5 tube.

Less More
11 months 3 weeks ago #6025 by FSM19
Replied by FSM19 on topic Panax TM64 B Geiger Counter (Circa 1960)
Interesting piece of kit. Our Isotope lab used a lot of Panax equipment in the sixties. They were tracing minerals etc in animals, and also monitoring grass and milk for radiation. Following the Windscale fire, it was a regular job for them until at least 1970 when I left.

Less More
11 months 3 weeks ago - 11 months 3 weeks ago #6026 by Simomax
Replied by Simomax on topic Panax TM64 B Geiger Counter (Circa 1960)
That's interesting FSM19. It hadn't occurred to me that labs etc would be setup after the Windscale disaster, though it makes sense! I actually live about 50 miles (as the crow flies) from Seascale (close to the old Windscale plant) and even closer to Heysham.

At first I thought the TM64 B to be for civil defence or similar due to it having the green haversack - much like some British army kit of the day. But after actually reading the first page of the manual it does state it's main purpose, or at least intended use in factories, hospitals and laboratories. That would make sense having no way to illuminate the display in the dark. Your mentioning labs picked my brain and I dug out a bit of kit that I thought was a Panax, but is actually a 'Research Electronics'. An old Dekatron counter/scaler. Panax made one that looks very similar to this. I'll probably do a post on that and some other larger vintage ratemeters/counters. This one isn't working properly. I think it needs a full re-cap as every electrolytic I have checked is bad. I replaced a few I had in stock and got the thing powered, but it only counts to 9! It counts from 0-9 fine, but when it is supposed to pulse the 10's Dekatron, this just isn't happening. Requires investigation!
Last edit: 11 months 3 weeks ago by Simomax.

Less More
11 months 2 weeks ago - 11 months 2 weeks ago #6029 by Simomax
Replied by Simomax on topic Panax TM64 B Geiger Counter (Circa 1960)
Ha! Talking about old Panax lab equipment, this popped into my ebay feed today; a Panax Scaler Type 102 ST. I'm assuming this was the type of gear that was in your lab FSM19? This is actually very similar to the Research Electronics scaler I am trying to repair at the moment, but waiting on some Dekatrons to become available on ebay as I think one has failed due to escaped gas.
It is a bit pricey though at £180 for a 'maybe working, kinda lights up, but dunno, spares or repair' condition. Less More
11 months 2 weeks ago #6032 by FSM19
Replied by FSM19 on topic Panax TM64 B Geiger Counter (Circa 1960)
We did have some of those, but a number were on 19" rackmounts. The type here was commonly used for school physics. I have another PANAX, an RM202 ratemeter.